CAACI exhibits at the NBAA Business Aviation Convention & Exhibition (NBAA-BACE)
George Town, Grand Cayman, (December 2015) – The Civil Aviation Authority of the Cayman Islands (CAACI) exhibited at the National Business Aviation Association’s annual Business Aviation Convention & Exhibition (NBAA-BACE) tradeshow, held at the Las Vegas Convention Center (LVCC) in Las Vegas, Nevada on 17-19 November 2015. NBAA-BACE is the premier event and annual meeting venue for the business aviation community in the North American marketplace. This event brings together key business and corporate aviation stakeholders from around the world, including current and prospective business aircraft owners, aircraft manufacturers, service providers, government and private sector stakeholders into one meeting space.The show closed with more than 1,100 exhibitors and 27,000 attendees (representing 50 US States and 96 countries), making it the highest level of attendees since 2008. Additionally, the 2015 show featured approximately 100 aircraft at a sold out static display at Henderson Executive Airport, as well as several aircraft models on the show floor at the LVCC. Throughout the 3-day event, attendees and exhibitors had the opportunity to attend various educational seminars and press briefings designed to bring greater awareness to the newest trends such as unmanned aircraft systems (drones); NBAA was also the venue for the Inaugural National Safety Forum which highlighted the principal safety issues facing the business aviation community.

Director-General, P. H. Richard Smith remarked, “The NBAA 2015 tradeshow is a signature event for the CAACI in the promotion of the Cayman Islands Aircraft Registry. As we face increasing competition from other jurisdictions which have launched aircraft registries, it is critical that we are present and take a leadership position in the registration services we provide,” continuing he commended the related aviation, legal and financial industry for their years of partnership, “Again this year, visitors to our booth commended the Cayman Islands on having well-rounded representation at NBAA, their questions on company incorporation, financing, legal matters and queries on flying into the jurisdiction could be answered along with enquiries on the registration process.”
The delegation of Cayman Islands’ business representatives jointly exhibiting with the CAACI at NBAA included Marcus Cumber of Island Air (local FBO operator) and Shari McField of Cayman-based law firm, Maples & Calder. Department of Tourism (DOT) and Stuarts Walker Hersant Humphries also provided brochures and information and giveaways to have on hand at the booth.

Each year CAACI offers partnership opportunities with the local business community to offer a prize package for a raffle at NBAA and would like to thank this years’ sponsors: Cayman Airways Ltd, Westin Grand Cayman Seven Mile Beach Resort & Spa, and The Wharf restaurant for kindly donating this year’s prize package. Mr. Emanuel Farias of Regalia International Aviation Ltd was the lucky winner of this prize package.
To review the highlights for this event please visit NBAA website

The CAACI has full designation for safety oversight as a UK Overseas Territory. In addition, the Cayman Islands is classified as Category 1 by the USA Federal Aviation Administration under their “International Aviation Safety Assessments” (IASA) programme that evaluates a country’s civil aviation authority’s ability to effectively regulate its aviation industry. This rating enables commercial air transport operators registered in Cayman to conduct international air transport operations, i.e, Cayman Airways, Ltd. The requirement for such rating lies with the CAACI being assessed as having technically qualified and appropriate administrative staff to effectively oversee the aviation industry in accordance with established standards and recommended practices of the International Civil Aviation Organization (ICAO). 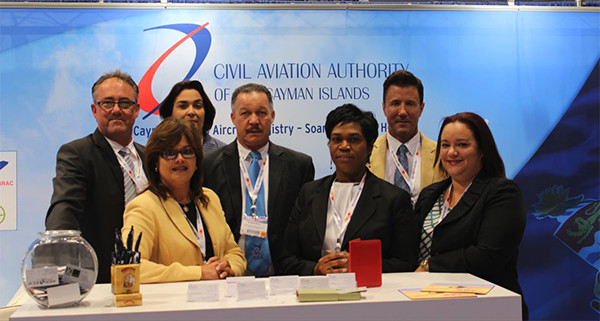